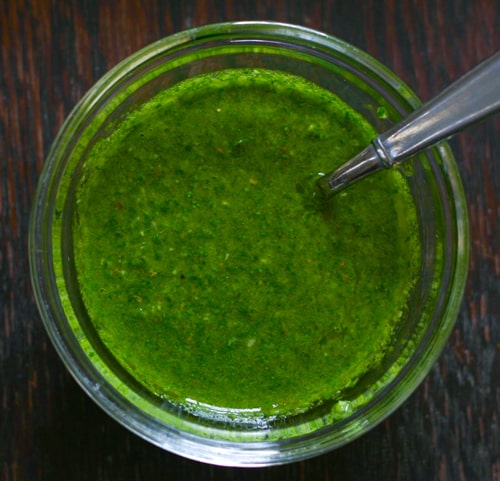 This is an easy chimichurri recipe made with cilantro perfect for steak. Chi-chi-chi-chimichurri, it just makes you want to sing and dance the salsa. It’s such a fun word to say. And a even funner way to dress up a cheap cut of steak. I made a grilled skirt steak to go with this. I first marinated the skirt steak in vinegar, lime and garlic to help tenderize it. After I grilled it, I sliced the steak thinly and placed it over a salad. Then I finished it off with this chimichurri sauce. I made this version of chimichurri with only cilantro, because I love cilantro. If your one of those people who have a strong aversion to cilantro, it’s okay, just use some flat leaf parsley instead.  You could also go half and half with the parsley and cilantro, so the cilantro isn’t so strong. This was the first time I made it fresh. I’ve bought it a few times bottled, and didn’t really care for it. I can’t tell you how much better it is made freshly. I’ll never buy the bottled version again.

Be sure to share on Instagram with the hashtag #EclecticRecipes and tag me, @EclecticRecipes!
Posted by Angela McGowan   on   September 9, 2010