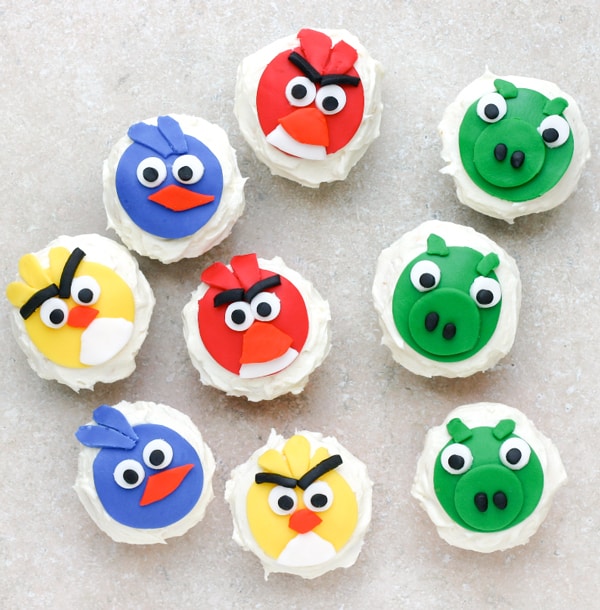 My son has been obsessed with Angry Birds. He got me and my husband hooked to. It’s a great game for those people who didn’t grow up playing video games. Believe me, I am the world’s worst at video games, but this is just and easy and fun for me, my 3 year old, and my experienced video playing husband. I used pre-made rolled fondant to make these cute little cupcakes. They were fun, and my son enjoyed making them with me so much.

1. Preheat oven to 350 degrees. Cream butter and sugar for cupcakes in mixer. Mix until light and fluffy. Add egss, one at a time, until incorporated. Scrape down sides and mix until light and fluffy. Sift together cake flour, baking powder and salt. Add vanilla extract to milk. Alternate adding milk and sifted flour mixture to mixer until it is all incorporated. Mix until smooth.

2. Scoop in cupcake liners. Bake at 350 degrees for 25 – 30 minutes, or until cupcakes pass toothpick test and is lightly browned.

3. After cupcakes are completely cooled, mix softened butter and shortening together in mixer. Add powdered sugar, and a little milk at a time until icing is moveable. Mix on high until light and fluffy.

4. Ice cupcakes and then roll out fondant and cut with circular cutters to make birds, eyes, pupils, and pigs’ snouts. Use a carving knife or non-serrated butter knife to make eyebrows, beaks, and feathers. For snouts, use a pupil and squeeze it into an oval shape. Attach pieces together with a touch of buttercream icing.

Be sure to share on Instagram with the hashtag #EclecticRecipes and tag me, @EclecticRecipes!
Posted by Angela McGowan   on   April 20, 2011