This is a delicious dish perfect as an appetizer or main course. We had bacon wrapped shrimp at two of our favorite restaurants on our recent trip to Gatlinburg over the Christmas holiday. My son loved them so much, I decided to recreate them at home. They were too easy to make. All you have to do is wrap the shrimp with bacon, and secure with a tooth pick. Either grill them, or broil them in your oven. They have to be cooked over high heat, so that the bacon crisps, without making the shrimp overcooked and rubbery. I love the bourbon sauce at some of the chain restaurants, so I modified a copycat bourbon sauce to get the recipe shown below. I used my favorite, Country Bob’s all purpose sauce in this sauce to make it extra special. You can also just use a steak sauce to get a very similar result. You can either brush the shrimp with the sauce before cooking, or just use it as a dipping sauce. The sauce is so rich, we just used it as a dipping sauce. 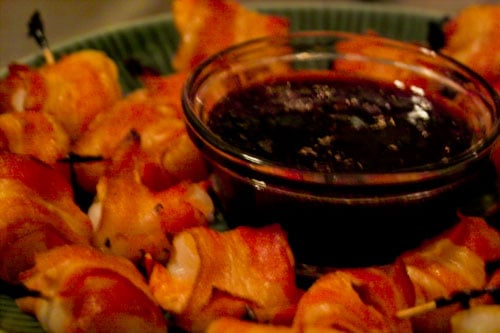 For the Shrimp:
large or jumbo raw shrimp, cleaned, peeled de-veined, and tails removed
sliced bacon, cut in half
toothpicks

Preheat grill, or oven broiler. Clean shrimp, then wrap them in bacon, and secure with a toothpick.

Combine all ingredients for the sauce in a small saucepan. Bring to a boil, and then reduce to medium heat. Reduce the sauce by half, or until it has thickened. You can use the sauce as a glaze, or as a dipping sauce.

Grill or broil shrimp until bacon crisps, and shrimp is firm.