Boneless Leg of Lamb with Rosemary and Garlic 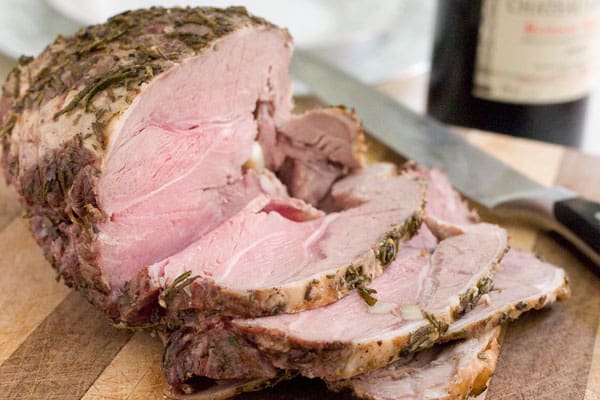 Nothing says spring like a beautiful roast leg of lamb covered in fresh rosemary. I had always been intimidated by leg of lamb. Who knew that roast leg of lamb could be so easy to prepare! I was in Sam’s the other day, and had a roast beef on my shopping list. I carefully picked one out, then turned around to the meat case behind me, filled with fresh New Zealand boneless leg of lambs. I curiously compared the price per pound, and saw the lamb was quite a bit cheaper. So I put my beef back and grabbed a leg of lamb. As children, my husband and I had never had lamb. We first sampled, and fell in love with it at a local Spanish restaurant (as in from Spain) here in Orlando. I have only experimented with making lamb chops, which turned out so good every time. For some reason, I had both a negative connotation and a snooty image of leg of lamb. These thoughts probably come from Edgar Allan Poe’s, The Tell Tale Heart, in which the murder weapon was the leg of lamb. Who knows? My previous notions of leg of lamb are certainly part of the past now. I cooked this leg of lamb until it registered 140 degrees on the meat thermometer. I took it out of the oven and let it rest about 20 minutes before slicing. Most recipes I found did not recommend cooking beyond 150 degrees, because the lamb will become very dry. I served the lamb with a spring mix salad, yeast rolls and mashed potatoes with sour cream and chives.

Boneless Leg of Lamb with Rosemary and Garlic

Preheat oven to 450 degrees. Remove lamb from package, but don't forget to leave the netting on.
Peel cloves of garlic and slice them. Place slits in the lamb and insert the garlic pieces all around the lag, being careful not to cut the netting.
Salt and pepper the lamb.
Chop the rosemary and add to a bowl with olive oil. Rub the oil and rosemary all over the leg of lamb.
Insert a thermometer into the middle of the leg of lamb. Don't rely on the pop-up thermometer. Roast for 10 -15 minutes at 450 degrees, then turn the oven temperature to 350 degrees. Roast until thermometer reaches 130 degrees for rare, 140 degrees for med. rare, and 150 for medium.

Be sure to share on Instagram with the hashtag #EclecticRecipes and tag me, @EclecticRecipes!
Posted by Angela McGowan   on   April 13, 2010