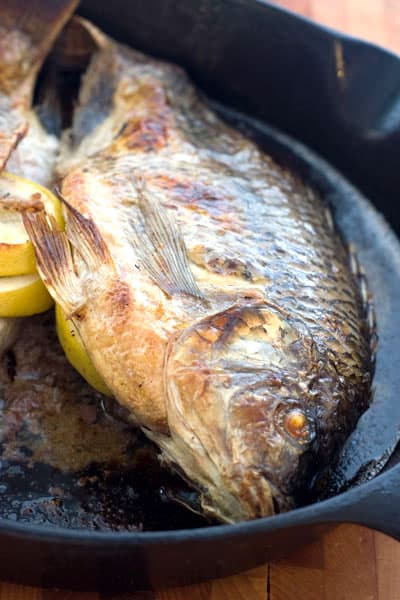 Whole Tilapia is easy to cook under the high heat of the broiler. In this recipe, I just used lemon, garlic  and butter to flavor the fish. Don’t be afraid of the heads. My son called these, Big Scary Fish. He’s hilarious, I just picked his fish, to make sure their weren’t any bones and served his without the head. I found a large bag of whole Tilapia at Sam’s at a great price. I was excited to find these because I had heard whole Tilapia is much tastier than the fillets. And it’s true, the whole Tialpia, even though still extremely mild in flavor, is much better than a fillet. The fillets almost don’t even taste like fish. I have been so disappointed in Tilapia fillets, I don’t even buy them anymore. I made this Tilapia with very simple seasoning, so I could taste the flavor of the fish. Tilapia is so mild, it will take on any seasonings. So any recipe you would use for flounder, cod, or other very mild white fish will work for Tilapia.

Preheat oven broiler to high. Place heavy cast iron skillet under broiler to preheat. Salt and pepper fish on inside and out. Stuff
Tilapia with lemon, garlic and butter. Oil the outside of the fish with vegetable oil.

Oil the preheated cast iron pan and broil fish until skin starts to crisp and brown.