I wanted to share with you today my guest room that I finished a few weeks ago. It’s been a long, slow process to re-paint and decorate our home. Right now my son’s room is in progress. We finished his bathrooom a few weeks ago and have been working on his room. We’re covering a mural and repainting a small porch like area in his room. It’s a little hard to describe, but hopefully we’ll be done sooner than later and I can explain it in photos.

This guest room is something I didn’t want to spend too much money on, so I repurposed as many items as I could from other rooms of my home that didn’t quite fit in. The picture below is what we started with, alot of dark blue and a sail boat? The attached bathroom was just as odd. It was painted a kelly green, a beige, and the cabinets had been halfway painted a bright white over an off white. It was such a mess. 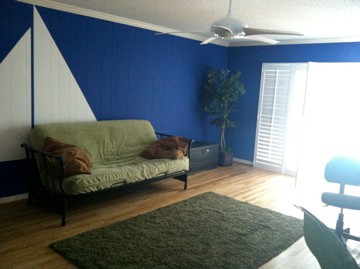 The first step we took was to refinish the floors in this room and throughout the main living areas of the home. We re-stained in special walnut, a stain that really brought out the grains of the oak, while adding a darker, richer hue. Then we added semi-gloss polyurethane. FYI, never use Minwax polyurethane for floors. It’s a nightmare. Stick to the regular poly.

Next we painted a grey that has a heavy dose of blue. I love this shade because at night with the light that has a yellow hue on the shade, the paint color has a green feel, and during the day a blue feel. It’s very pretty.

Next we did the bathroom in the same wall and trim color. I had previously picked out some scrap granite that the guys installed in this bathroom when we had our kitchen done. Then I just added some fresh towels and a pretty shower curtain and that’s it. Just removing the dark green wall in this tiny bathroom really helped make it feel much larger.

Source List (some of the things, like the bed and futon were purchased more than 10 years ago)

One Response to “Guest Room Makeover”