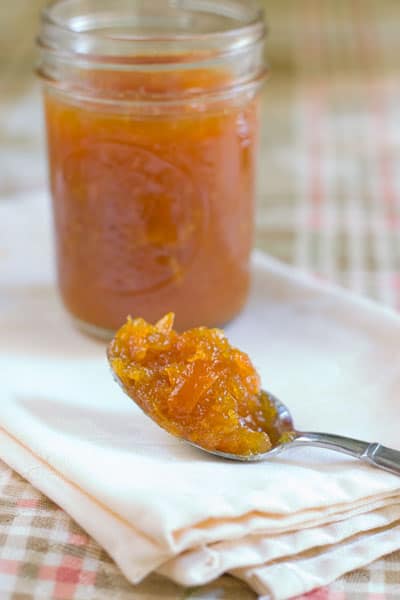 Do you want your home to smell citrus fresh, then try this delicious recipe for orange marmalade. I had a big bag of oranges in my refrigerator that no one in my family had touched. My guys are much more found of apples and pears, so most of my citrus will get left for me to cook with. I had never made marmalade before, so I searched the internet to find the best tips on making marmalade. I don’t like marmalade that is too bitter, so I made sure to discard the white peel and the seeds. Many recipes called for just slicing the oranges thinly with a mandoline. In this recipe, I used a vegetable peeler to peel off the outer peel of the orange, and discarded the thick white peel. I also added regular powdered pectin. I used orange juice instead of lots of added water for extra flavor. You can definitely use water instead of the juice. Using the juice produces a very full flavor marmalade. It tastes nothing like a store bought marmalade. It is full of orangy goodness. I told my husband it tastes like sunny Florida in a jar, yum.

Peel oranges with a vegetable peeler. Remove the white parts of the oranges and discard. Chop the orange segments, being sure to remove any seeds and add to a large pot.

Zest lemons and add to pot. Juice lemons, and add their juice to the pot. Add sugar and orange juice.
Bring orange mixture to a boil, then reduce to a simmer. Add pectin and water to a separate sauce pan and bring to a boil. Boil until thickened, then add to orange mixture.

Simmer oranges until they have reduced, are darker in color, and have thickened. You can test for doneness by dropping some of the marmalade on a frozen plate, and let it sit for 30 seconds. Tilt the plate, if it still runs, its not done. If it's soft set, then it is done. Remove marmalade from heat and start canning.

Be sure to share on Instagram with the hashtag #EclecticRecipes and tag me, @EclecticRecipes!
Posted by Angela McGowan   on   April 1, 2010