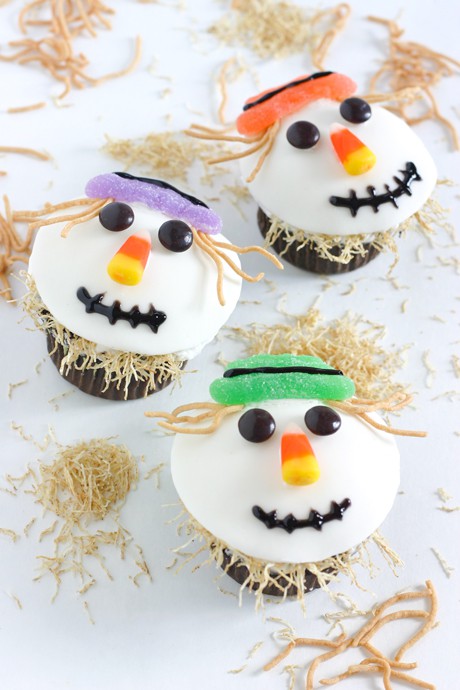 Happy Halloween! I thought these cupcakes were so cute, I just had to try them. I love the cute part of Halloween, and these are adorable. This is a very cute cupcake idea for your kids. My little three year old sat on the counter and watched me decorate, handing me the candy pieces. He probably ate more candy than he handed me, but he was having fun. After he watched me, I gave him 2 cupcakes of his very own, and he surprised me with his cupcake decorating skills. The cupcake is a spice cake with a maple flavored frosting. I added white fondant on top to create a very smooth, clean face. I used chow mien noodles for the hair, shredded wheat for the hay, brown M&M’s for the eyes and candy corns for the nose. The mouths are made with black decorator gel. I used a toothpick to get the finer stitch lines of the mouth. Be sure to get the old fashioned large shredded wheat to break up for the hay part of the scarecrow.  I tried using mini shredded wheat at first, because we had it on hand, and it did not work.

2. Then add 1/2 the flour, 1/2 the milk, then the other half of the flour and then the rest of the milk. Mix just until batter comes together and is smooth.
Pour batter into cupcake cups. Bake at 350 degrees for 20 – 25 minutes, or until toothpick is clean when inserted and removed from the middle of the cupcakes.

4. Roll out fondant and use a biscuit cutter to make the circles, place on cupcakes.

5. Use extra frosting to attach candy pieces to cupcakes to make scarecrow faces as shown in picture. For gumdrop hats, take 2 gumdrops and squeeze together. On a sugared surface, roll out to form the top of the hat. Take another gumdrop and squeeze with your fingers into the shape of the brim. Press this gumdrop on the other piece of the hat. Attach hat to cupcake with frosting. Use the black decorator gel to form the seam.

Be sure to share on Instagram with the hashtag #EclecticRecipes and tag me, @EclecticRecipes!
Posted by Angela McGowan   on   October 30, 2010