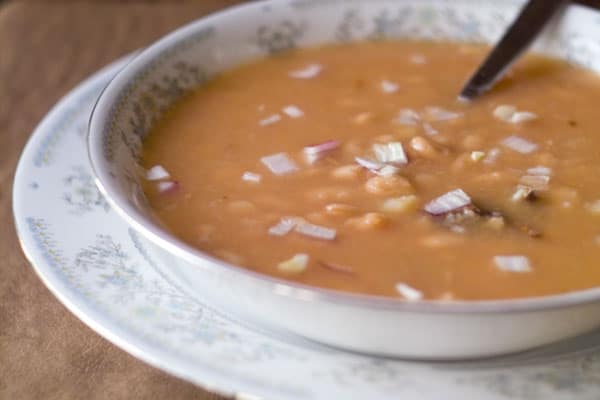 Do you want to eat like a senator? This is the traditional bean soup of the senate. This soup is on the menu everyday in the congressional dining areas. This tradition has been in place since a senator, which senator is debatable, insisted on this soup being on the menu everyday sometime in the early 1900’s. I grew up eating this soup very often. It is a great economical comfort food. My father use to always just call it navy bean soup though. This was one of the very few dishes he ever made. He was a very traditional, strong man who seldom entered the kitchen except to look for what my mother or I had been cooking. After his death, I did not make this soup for quite a while. My first attempt to make it turned into a disaster. It was tasteless, and just tasted like beans in broth. I was so disappointed, I just put the thought of ever having that delicious comforting bean soup out of my head. Then one day I came across Senate Bean Soup on the web. I had never heard the name before because my dad always said this was navy bean soup. I quickly realized in reading the recipe, that my father’s navy bean soup was actually a variation of Senate Bean Soup. My mistake had been not adding potatoes to the soup. I tried the recipe again, and it was even better than I remember. Perfectly comforting, and full of flavor. I added my father’s traditional garnish of freshly chopped onions and Tabasco and served it with cornbread. Even my son, who didn’t care for my black bean soup, ate a big bowl all by himself.

This is my father’s recipe for Senate Bean Soup, with a few modifications. His recipe varies from the original in that it does not have celery, but has additional flavor from tomatoes. He use to add ketchup, (not part of the traditional recipe) but I am adding a little tomato paste in my recipe. He also added dried potato flakes, but I added the real thing instead. I also made this soup in the crock pot, instead of the stove top.  I try to take every chance I get to use my crock pot. Use which ever is more convenient for you.

Add soaked beans and their water to a large soup pot or crock pot. Add additional water till you get 6 cups of water. Add onions, garlic, smoke bone and tomato paste.

Peel and cut up potatoes. In a separate saucepan add the potatoes and enough water to cover them. Boil until very tender. Drain the potatoes and then mash them with a little water. Add mashed potatoes to beans.

Be sure to share on Instagram with the hashtag #EclecticRecipes and tag me, @EclecticRecipes!
Posted by Angela McGowan   on   February 24, 2010