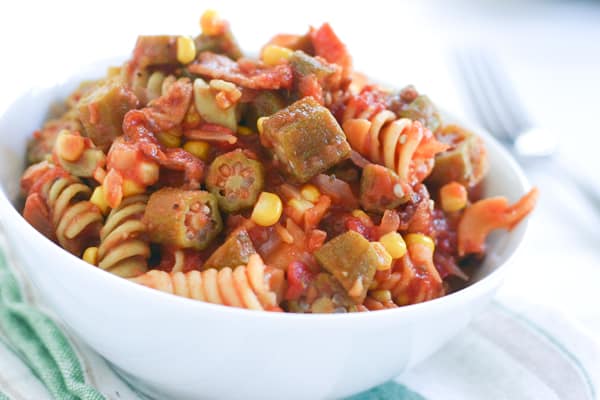 I’ll never forget when I was about 12, I was spending the night at my best friend’s house and she told me her mom was making goulash for dinner. We were both so excited, because it was our favorite dish. We ran into the kitchen and sat at the table to watch her cook. Hamburger went in the pot, and then she browned it. A little seasonings went in, then jarred spaghetti sauce, and then cooked elbow macaroni. I said, “What’s that? That’s not goulash.” They argued it was, and I sadly ate the gross hamburger and macaroni yuckiness. I figured out later, since they were from up north, they made a regular American goulash, but I didn’t like it all.  It had no veggies, and even back then, I was a bit of a food snob.

My mother’s goulash was much different, it was full of vegetables and rarely had meat. It was almost exactly like the recipe here, except she used her homemade jarred tomatoes made from beefsteak tomatoes, and rarely ever added any bacon. I also added Hungarian paprika to my version, just because it seemed like a good idea. My husband always says my vegetarian dishes would be better with some added bacon, so the bacon was for him. I was unsure of what exactly to call this goulash, and I am sure I’ll stir up a debate, but since my mom was a southern gal, I’m going to call it a southern goulash. She use to make goulash for me and her on the one day of the week my Dad would have a steak. My mother and I took the opportunity to cook our favorite foods, or try new recipes on the days that he wanted a big T-Bone steak. Her goulash was a pasta dish (usually vegetarian) that gets it’s creaminess from fresh okra.

So if you turn your nose up at regular goulash, and happen to like okra, this is the dish for you. It makes a perfect vegetarian pasta dish if you leave out the bacon. The rich creaminess from the okra makes this pasta dish very comforting, and the San Marzano tomatoes makes the taste so incredible.

Cook pasta according to package directions in a different pot to just shy of al dente. Add lima beans and both cans of tomatoes to okra mixture. Add dried thyme, oregano and paprika. Season with salt to taste. Bring to a boil and reduce to a simmer.

Add pasta and continue to simmer until pasta is done, about 5.

Be sure to share on Instagram with the hashtag #EclecticRecipes and tag me, @EclecticRecipes!
Posted by Angela McGowan   on   October 23, 2010