Should the stuffing be in the bird, or should it be baked separately on the side? That’s the big question. The great stuffing debate at Swanson is where we can vote about this question plus others concerning the stuffing, or should I say dressing? When it’s on the side, it is referred to as dressing.

My father liked it in the bird, but my mom wanted it on the side, so they took turns. One year it would be in the bird, and the following year it would be on the side. My mom didn’t like the stuffing in the bird because she said it made the stuffing taste gamy and the bird dry, because you have to cook the bird longer to get the stuffing up to temperature. Instead, she stuffed the bird with chopped potatoes and onions, apples, or oranges. My Dad preferred the bird was stuffed because he said that was the more traditional thing to do. He was a strong believer in following traditions, and never understood why mom would want to dirty an additional dish just to make the dressing on the side. 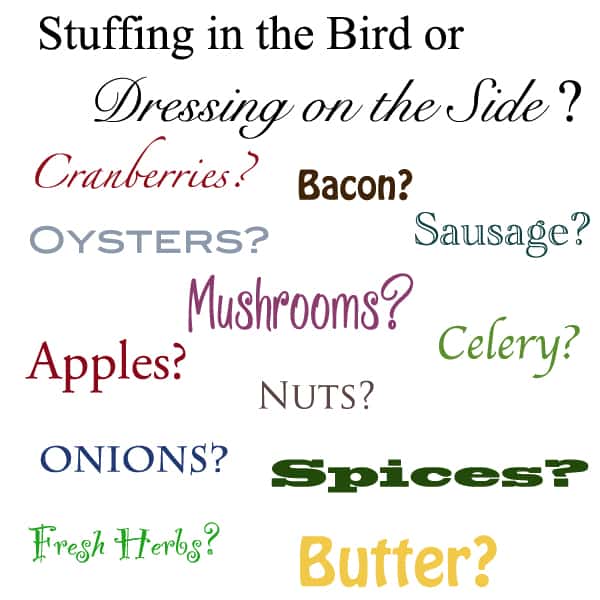 Now, I always make the dressing on the side. I also feel that cooking the stuffing in the bird makes the bird dry and the stuffing taste gamy. I stuff my turkey with apples, oranges, or fresh herbs. My favorite way is to stuff the turkey with lots of fresh herbs and butter. Then I will pour pinot grigio wine into the cavity and around the bird and bake it in a baking bag.

Over the years I have tried just about every add-in to make different dressing variations. There is much debate in different families on what should be included or excluded from the stuffing. Cranberries and apples are a recent add-in that I have fallen in love with. I love to add them to a cornbread dressing like I have done in the recipe below. Bacon is an addition I don’t think anyone could disagree with unless your a vegetarian. Bacon makes everything better. Sausage and mushrooms are a favorite addition to my mom’s traditional dressing recipe, which I have also done in the other recipe below. Celery and onions are a classic combination that I just can’t leave out of any of my dressing recipes. Fresh herbs and spices are another addition that I have to add because they make everything taste so much better. Butter is an add-in my mom always used, and that I also add to all my dressing recipes. However, oysters are the only add-in that my family definitely passes on. We prefer our oysters on the half shell, fried, steamed or in a stew, but we’ll pass on adding them to the dressing.

The biggest question, after determining if you should have stuffing in the bird, or dressing on the side though is whether to have traditional or cornbread dressing. 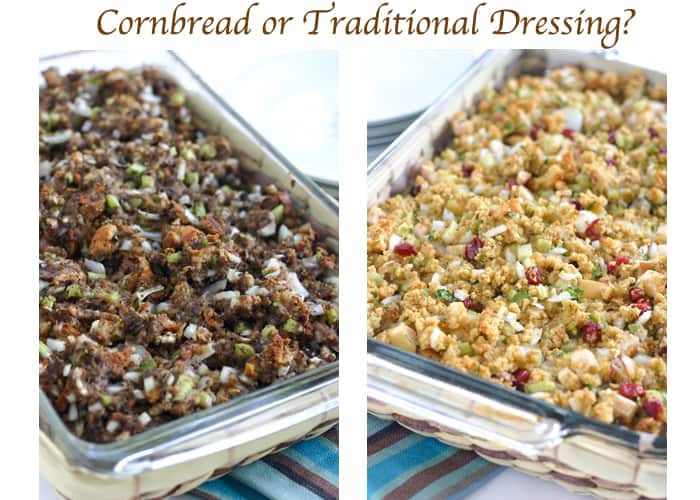 This was a huge debate in our home, because my mom and my older sister always disagreed on the stuffing. Mom liked traditional dressing, made with Pepperidge Farm® Herb Seasoned Stuffing, and my sister insisted on cornbread dressing. Every Thanksgiving that I can remember, when my sister was visiting, we always had both. Mom couldn’t stand my sister’s cornbread dressing. She said cornbread was to be eaten as bread, and never put in the dressing. My sister hated my mom’s moist traditional stuffing. She said it was too moist, and had a general despise for it.

For our family now, we make dressing with both traditional stuffing mix and cornbread stuffing mix.  For the purposes of the Eclectic Recipes Great Stuffing Debate, I have made a recipe for traditional stuffing with added mushrooms and sausage very similar to my mother’s recipe from Swanson’s broth, and my own recipe for Cranberry Apple Cornbread dressing, a recipe that will surely impress my sister.

Recipe Note: you can also use a 3-quart casserole for this recipe. Alternate Preparation: for crunchier stuffing, bake the stuffing uncovered.
Flavor Variation: For traditional stuffing, omit the sausage and mushrooms.
Flavor Variation: for Cranberry & Pecan Stuffing, stir 1/2 cup each dried cranberries and chopped pecans into the stuffing mixture before baking, and omit the mushrooms and sausage. 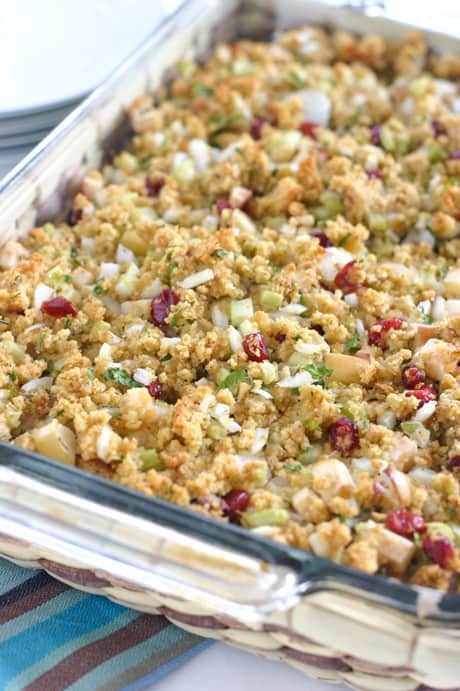 Recipe Note: you can also use a 3-quart casserole for this recipe. Alternate Preparation: for crunchier stuffing, bake the stuffing uncovered.

For a $1 off coupon for  a 26 oz carton of Swanson Chicken Stock click here. When you visit, just watch the video, it is a hilarious video about a family’s stuffing debate. Then share the video with friends to get your coupon.

So here’s the question for a chance to win a $500 Visa card from Swanson broth, cornbread or traditional? And should it be stuffing in the bird, or dressing on the side? Please tell me about your family’s stuffing debate in the comment section below. What are your favorite add-ins? What add-ins should always be excluded?

There are also 3 more bloggers participating in Swanson’s Great Stuffing Debate. For three more chances to win, be sure to visit the BlogHer.com exclusive offers page and enter those giveaways too.