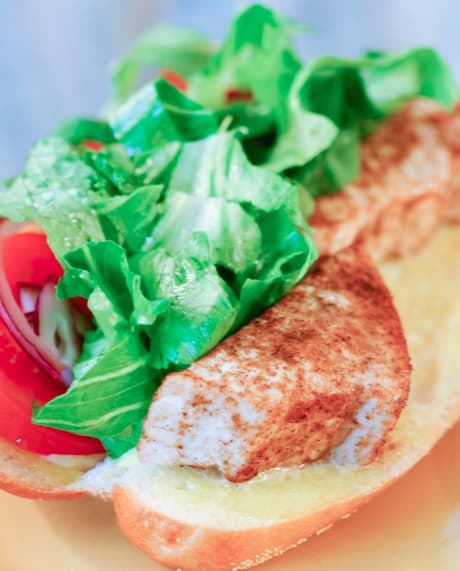 One of the most popular menu items at any Florida bar and grill is a blackened grouper sandwich. Restaurants will compete with pricing and I have seen prices as low as 6.99. My family and I were all crazy for blackened grouper sandwiches a few years ago. Anytime we went out, everyone at the table had the same thing. It didn’t hit me that all these restaurants weren’t really selling fresh grouper, as claimed, until a local news station exposed them. There’s a really good article in depth about it here. What they are actually selling is usually a fish similar to Florida grouper that is from China. After reports of “drugged fish” from China, I always eat as locally as possible when fish and seafood are concerned.

Here is an ode to an old favorite of ours, re-invented with a swordfish steak. And instead of drinking an Icehouse along with our grouper last night, it was Guinness with swordfish, and sweet potato fries instead of ordinary fries. Even the mayo has been upgraded to this version of Alice Water’s garlic infused aoili. I snapped this picture last night in the living room. I didn’t even bother to set up my lighting, because we wanted to eat while the little one was still taking his late nap. He had specially requested shrimp earlier yesterday, so he got a sautéed shrimp poor boy when he woke up.

Preheat broiler to high. Sprinkle fillets with blackened seasoning and broil under high heat until fish is just firm. Be careful not to overcook.

Be sure to share on Instagram with the hashtag #EclecticRecipes and tag me, @EclecticRecipes!
Posted by Angela McGowan   on   November 13, 2010