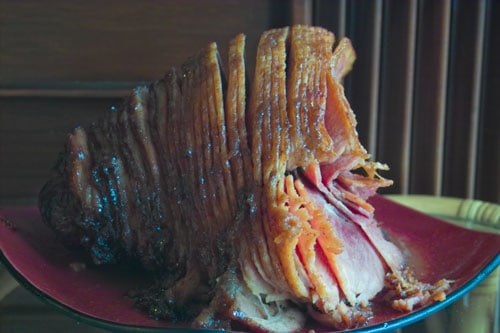 This is an easy ham glaze that is very delicious. This recipe is from Alton Brown. The only adjustment I like to make is to use my own homemade ginger cookies, and to cook the ham to a higher temperature. The original recipe is 140 degrees, but I like to take the ham to 150 degrees. I used a spiral ham because they are so much easier, and the glaze seeps in between the slices, making the most delicious ham. Your spiral ham will most likely come with a glaze packet. Try to resist the urge to use it, and just through it out. If you insist on using it, reduce the brown sugar and ginger snaps from 2 cups to 1 cup. Add all ingredients into a small saucepan. Add enough additional bourbon or water until all the dry ingredients are wet. Bring to a boil, and reduce to a simmer. Simmer until the glaze is very thick. The ham this way is just as delicious, but it lacks that wonderful crunch the other method produces. The glaze seems to slide off the ham more this way also. It is so hard for me to throw anything out though, and I have done my ham like this a few times, even though I prefer the recipe without the ham glaze packet. What will make this recipe really stand out from the rest, is the use of ginger snaps, especially homemade ginger snap cookies.

Preheat oven to 250 degrees. Remove ham from packaging and rinse well. Place ham, cut side down, in a roasting pan. Cover with aluminum foil. Bake ham until the internal temperature is 130 degrees.

Remove ham from oven, and turn oven temperature to 350 degrees. Apply mustard with a brush liberally all over ham. Press brown sugar into the mustard. Spritz the ham with bourbon, or water. Press crushed cookies on ham.

Bake at 350 degrees, uncovered, until internal temperature is 150 degrees.

Be sure to share on Instagram with the hashtag #EclecticRecipes and tag me, @EclecticRecipes!
Posted by Angela McGowan   on   January 12, 2010