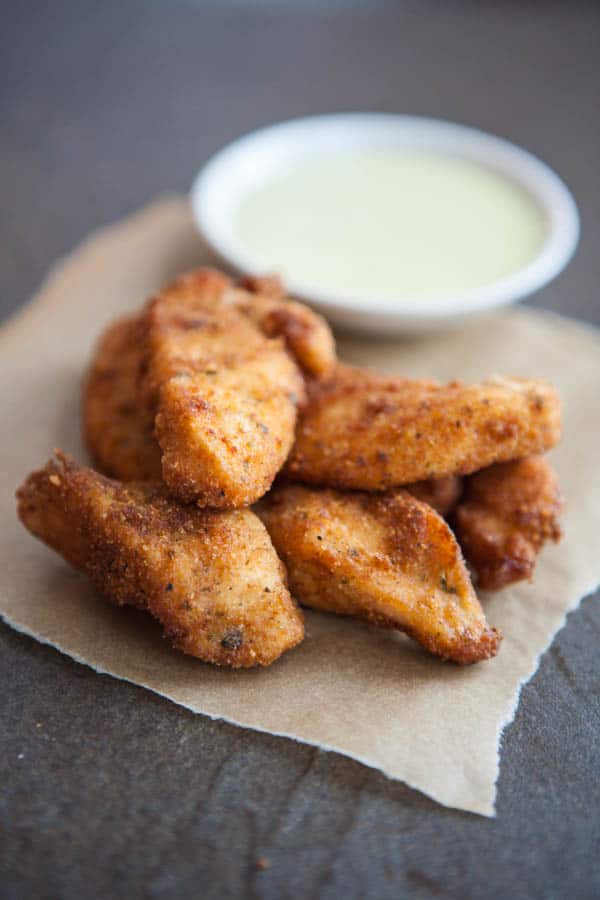 My son has grown to be a pretty picky eater. I thought I was doing so well with him when he was little, but now after a year in pre-K, and with the influence of other picky eating friends, he’s become really picky. He won’t even try new things anymore and will ask me to pack his lunch like another kid in class who only takes cheese nachos for lunch. It gets pretty aggravating sometimes. Oddly enough though, he’ll still eat at least 1/2 dozen raw oysters with us and scarf down sushi (just the raw fish) like it’s candy. I don’t get it!

One thing I can count on though is that he’ll never turn his nose up to chicken tenders. It’s his favorite. So when I want to introduce some new flavors to him, I add them to familiar dishes he loves. It’s also a fun way for my husband and I to enjoy chicken tenders in a more gourmet, grown-up version for dinner.

This recipe is based on one I found on www.carbonellusa.com. You start off with seasoning your chicken with Five-Spice powder, an Asian seasoning with cloves, cinnamon and other spices. Then bread with bread crumbs or panko. I used breadcrumbs because it’s a finer crumb and I prefer it for frying. If you decide to bake these chicken tenders, panko would be a better breading to use.

For the sauce, it’s a basic thin mayonnaise with lemon juice, egg yolks, lots of olive oil and garlic. For extra flavor, I added a small handful of Thai basil and cilantro before blending it. The herbs add an incredible light flavor that pairs wonderfully with the earthier spices used on the chicken.

For the dipping cream, add the lemon juice, egg yolks, garlic, vinegar, a pinch of salt and fresh herbs to blender. Blend until smooth. Drizzle in olive oil with blender on. Bland until mixture is the consistency of heavy cream. Taste for seasoning then set aside in refrigerator.

Heat 1 cup olive oil in large cast iron skillet over medium heat. Season the chicken with five spice powder, salt and pepper. Whisk egg whites and add seasoned chicken to egg whites. Toss to coat. Add breadcrumbs to a shallow dish. Add chicken strips to breadcrumbs, one at a time, and turn to coat in breading.

Add chicken to hot oil and cook until browned on each side. Be careful not to over crowd pan when frying chicken. Drain on rack or paper towels after chicken is done.

This post sponsored by Carbonell Olive Oil. All opinions 100% mine.

This blog post is part of a paid SocialMoms and Carbonell blogging program. The opinions and ideas expressed here are my own. To read more posts on this topic, click here.