This is a Sponsored post written by me on behalf of Fresh From Florida for SocialSpark. All opinions are 100% mine. 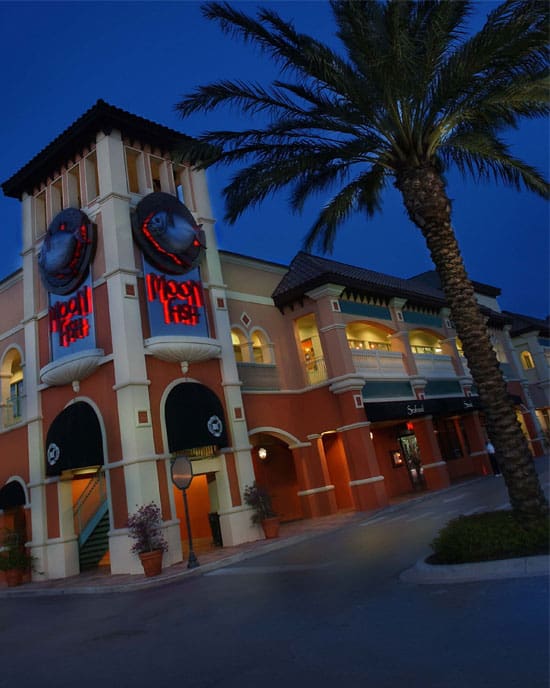 One of the things I’ve always loved about living in the Orlando area is our access to not only wonderful amusement parks like Disney and large conventions and shows, but also all the dining options. Did you know Orlando was the most visited city in 2013? We finally beat out my second favorite city, New York!

A few nights ago, we tried out Moonfish, their popular seafood restaurant. I’ve been wanting to go there for a while, so we decided to make the drive down to south Orlando to see what all the buzz was about. The decor, inside and out, was just beautiful. Check out that door below. The door handle is the fish, how cute is that?!

The ambience of the restaurant was so beautiful. The tables had fresh white tablecloths, the lighting was just ring and the the noise level was pretty low.

Moonfish is known for their fresh seafood options. They have fresh seafood flown in everyday from different parts of the world. On the menu, you can find where each fish was caught, as well as who caught it! It’s pretty cool.

Their style is a blend of of Pan-Asian, Cajun, Pacific Rim, and Floribean flare. There’s something on the menu to satisfy just about anyone’s tastes.  In addition to their fish-fusion cuisine, MoonFish also offers Prime and Choice mid-western aged steaks cooked over a natural wood-burning pit and an intriguing sushi menu.

Here’s a peak at the fresh fish selections they have available, as well as some of their amazing wines.

On the sushi menu, they have many options for sushi and sashimi, as well as a few rolls. They also have raw oysters and even duck carpaccio.

We started out with some tuna and salmon sashimi. It was the highest quality sushi grade fish. We loved it.

Besides being able to eat the freshest seafood from every corner of the ocean, they also have some great local options that are Fresh From Florida.

My husband’s lemonade is somewhere in the background. He wouldn’t put it down long enough for me to get a  picture because it was so good!

Also fresh from Florida on the menu are Gulf Oysters from Apalachicola. We didn’t order those because we go to a local oyster bar every week or so and completely pig out on raw oysters. We wanted to save our appetites.

On the menu they also have a Florida stone crab appetizer that was amazing. We ordered that and it was gone before I could get a good picture. Florida crab is the best!

For dinner, we all ordered something different and shared. My son ordered the cedar plank Atlantic Salmon.

And I ordered the Nori Crusted Yellow Fin Ahi Tuna.

All these dishes were just so, so good. The fish was so fresh and prepared so well. For fresh local sides, they also have Szechuan green beans that are Fresh From Florida that we enjoyed.

For dessert, my son insisted on  a decadent chocolate cake with a Grand Marnier chocolate icing that was to die for. But my husband and I had other plans. We decided to go with the Baked Florida.

At the table, the server lights up some Bacardi 151° and toasts the marshmallow cream with the flaming Bacardi. To finish, he pours over some warmed orange marmalade. Now what says Florida more than that! It was one of the best desserts I’ve ever had. Here’s a peak inside that Baked Florida.

Next time you’re in central Florida, don’t forget to stop by Moonfish, or one of their partner restaurants. Moonfish is just minutes from the Walt Disney World area, Universal Studios, & Sea World.