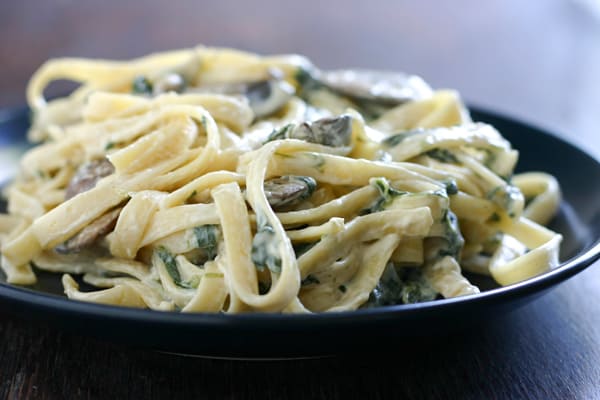 Here is a lower fat version of the classic fettuccine alfredo with added spinach and mushrooms. Instead of the vegetables, you could add sauteed chicken or shrimp, or any other combination of vegetables you like. I made this alfredo sauce with nonfat cream cheese and fat free milk. I didn’t sacrifice a good Parmesan cheese though, I went ahead and used a great Parmesan, and plenty of it, to flavor this dish. I also skipped the butter, in favor of olive oil. The result was a very rich, creamy delicious pasta. When made with nonfat cream cheese, this dish is close to 46 grams of fat for the whole recipe (enough to feed at least 4 people), not per serving. Compare that to a traditional chicken fettuccine alfredo at Olive Garden which is over 80 grams of fat per serving. If you want to restrict the fat even more, scale back on the amount of Parmesan cheese you use to 1/2 or 1/4 cup. Most of the fat in this dish comes from the Parmesan cheese, 30 grams of it, with the other large percentage, 15 grams, coming from the olive oil.

Cook pasta according to package directions until it is al dente. Drain well.

Add white pepper and Parmesan. Melt Parmesan in sauce. Add pasta and simmer for 2 - 3 minutes over low heat while tossing pasta in sauce.

Be sure to share on Instagram with the hashtag #EclecticRecipes and tag me, @EclecticRecipes!
Posted by Angela McGowan   on   September 20, 2010