Paella that Won’t Break the Bank

Paella can be a very expensive dish. It has expensive saffron, several different kinds of meat, and seafood selections. You can go all out and make very expensive paella with lobster, expensive fish, imported chorizo and loads of quality saffron. A restaurant in Manhattan, Sofritos, even had a 00 Paella. At our house, we love a good paella. I would love to make it more often, but to buy all the ingredients, it is pretty expensive. When we visited Paris a few years back, we ate at a wonderful Spanish restaurant. There, they had several types of paella, seafood, chicken, rabbit, and fish versions. Since having the paella there, I like to cook my paella in the same way. I don’t like to have too many varieties of meats in the dish. In this recipe, I have just used a seafood melody and a little chorizo as the meat in the dish. I recently found a 1 pound seafood melody, consisting of shrimp, bay scallops and calamari rings, for just $5 at my local Aldi’s supermarket. I have also seen the seafood mix in larger packages at Walmart and Spanish supermarkets. I also used Aldi’s chorizo for this dish. Their chorizo’s casing has to be removed, so the sausage crumbles when cooked. I liked it this way very much because it ran through the rice more evenly than having large slices. I used Badia brand saffron, an inexpensive Hispanic brand. It was about $2.50. I use 1/4 of this package in this recipe. You could also leave out the saffron, because there is plenty of flavor from the chorizo. All in all, after the Aldi’s special’s this paella was just over $10. Previously, I had been spending closer to $30 for this dish.

So, Pardon Me While I Burst into Flames. Thanks Incubus. 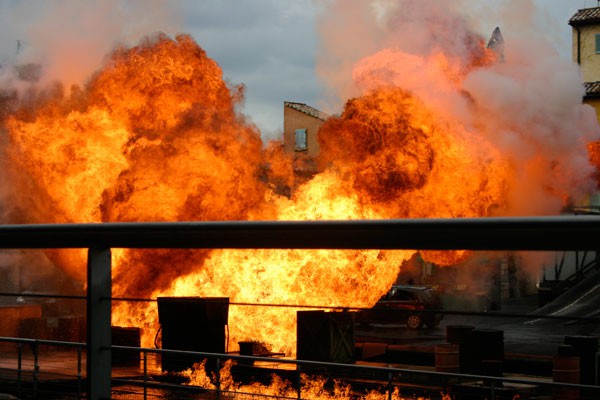 This is my most recent exciting picture. I thought it would be more interesting. This is a picture from this past weekend. We visited Hollywood Studios, previously known as MGM. We had lots of fun. My son liked the toy story ride most of all. This picture was from the Lights, Camera, Action Extreme Stunt Show. My son is really into race cars right now, and he enjoyed watching the race cars, motorcycles and jet skis zoom around. Brakes squealed, fire balls raged, a stunt man fell from a building and another stuntman was engulfed in flames. I was starting to think that this park, our last to visit in Disney, was a bore, until we got to this show. It was very exciting!

Paella that Won't Break the Bank

Sauté for just a minute or so.

Add rice, saffron and chicken stock. Bring to a boil and then reduce to a simmer. Simmer covered for 15 minutes.

Remove lid and add seafood melody and fresh cilantro on top of rice. Return lid for another 5 minutes. Paella is done when shrimp have turned pink. Be very careful not to overcook seafood, it will be rubbery. Garnish with additional fresh cilantro and lemon wedges.

Be sure to share on Instagram with the hashtag #EclecticRecipes and tag me, @EclecticRecipes!
Posted by Angela McGowan   on   April 28, 2010