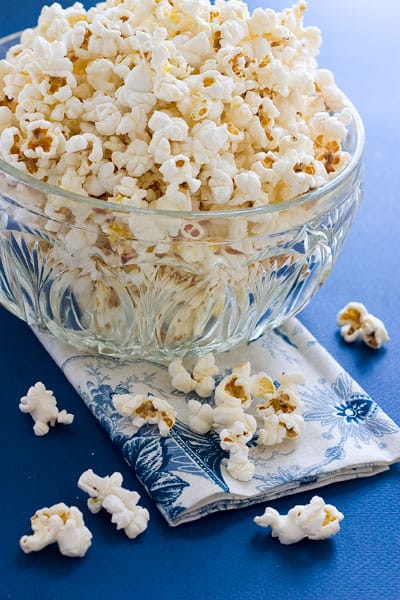 When I was a kid, we had an old movie theater in town. When we rode by in the afternoon, I could smell the wonderful popcorn aroma. It was so comforting. I always begged to go to the theater, but no one ever took me when I was little, and I never got to taste their wonderful popcorn, but I’ll never forget the smell. When I was in the eighth grade, we walked from our middle school, which has since been condemned and vacated (it was the old African-American school before desegregation) to attend a movie as a field trip. I was able to sit in the theater for the first time, engulfed in the intense fragrant aroma, but being a poor kid, had no money for any popcorn. Not long after, the theater closed. It wasn’t until my boyfriend, my now husband, had his sixteenth birthday that I was able to go to a theater again. I was 17 and had driven the 45 minute drive over 30 minutes of dirt road to get to his house so his parents could take us to Panama (another hour away) for his birthday. We went out to eat and then to a movie, where all 5 of us got to split a large popcorn. It was almost heaven, but it didn’t quite have the same aroma as the old fashioned popcorn in my hometown theater.

Fast forward years later, and many popcorn recipes tested, and I still haven’t found that exact smell again. I have been to theaters that have a close aroma to that old popcorn smell, but nothing ever matches it exactly. Well that all changed last week. A small company contacted me to see if I wanted to try their coconut oil and I said I would love to. I researched on the web to see what I could do with my new gift and found that the old theater popcorn was made with 100% coconut oil. I quickly made some on the stove and there was the smell. The smell that I remember coveting so much as a child. It was there, and now I could taste it for the first time, more than 25 years later. Yes it was worth the wait. It was perfect.

Here’s the recipe I used to get there. You can also check out my review of the Tropical Traditions Coconut Oil here.

popping corn, enough to have a single layer in the bottom of a saucepan
about 2 tablespoons of Coconut Oil, enough to coat the bottom of the pan, and have plenty for the corn to swim in
salt to taste
melted butter (optional)

Turn heat to medium and pop until you can count 2 seconds in between popping corns. Remove from heat, still covered, and let the corn continue to pop, until it stops, about 2 minutes.

Top with salt and melted butter.

Be sure to share on Instagram with the hashtag #EclecticRecipes and tag me, @EclecticRecipes!
Posted by Angela McGowan   on   August 1, 2010