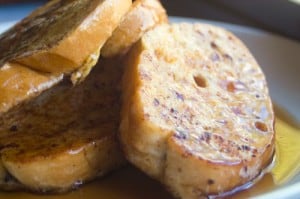 This is an easy recipe for french toast with a few popular variations. French toast is a very popular and easy to make meal for anytime of day. According to Wikipedia, it was originally called German toast here in the states before the first world war. But because of anti-German sentiment, the name was changed to French toast. Stale bread dipped in egg and then fried has actually been around since Roman times. Though it has many different names in different cultures, it is essentially the same. It is a dish that I, like many of you, grew up with and still enjoy today. The key to great french toast is to use quality ingredients. I love to experiment with the many types of bread to make french toast. My favorite is to just use day old french bread, as shown in the photo, but I also love to use any variety of breads that contain nuts and seeds. Sourdough and challah bread are also wonderful to make french toast with. The best french toast is made with bread a little on the stale side. I have also found that cream mixed with the eggs makes the best toast. But if you are watching calories, just whole milk, or even nonfat milk. You can add any type of fresh fruit you have on hand to make a delicious and nutritious breakfast. 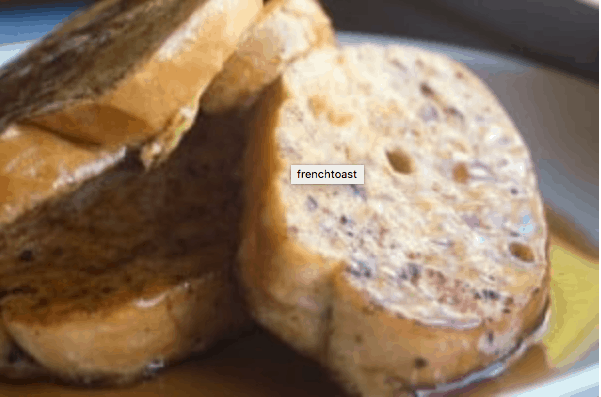 1/4 teaspoon orange extract, and 2 teaspoons of grand marnier
the zest of an orange

Just mix these ingredients in the egg batter.

Just mix these ingredients in the egg batter.

Just substitute the milk or cream with buttermilk.

1 teaspoon vanilla extract, and 2 teaspoons of good whiskey or scotch

Just add these ingredients to the egg batter, the alcohol is optional.

any sliced fruit and cream cheese or Nutella

Add sliced bananas or strawberries with a smear of softened cream cheese between two slices of bread, then dip the sandwich in the egg mixture.

Cook on each side until golden brown. Cook on medium to medium low heat. Be careful not to burn. Try not to flip the toast more than once.

Serve immediately. Keep in mind you can also change the flavor of the recipes by changing the type of bread you use.

Be sure to share on Instagram with the hashtag #EclecticRecipes and tag me, @EclecticRecipes!
Posted by Angela McGowan   on   December 24, 2009