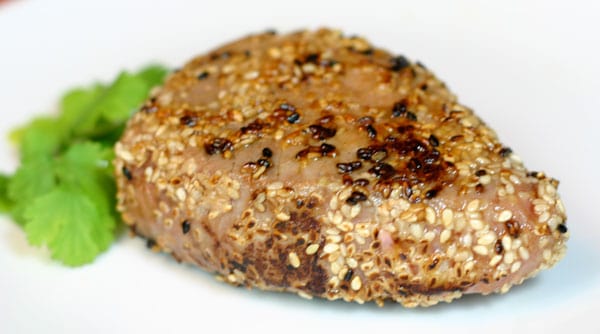 I saw the most amazing tuna steaks on an episode of Alton Brown’s Good Eats quite a while ago. I had been meaning to make the tuna ever since, but never got around to it. I haven’t come across the tuna loin that Alton’s recipe calls for, but I did find some Ahi tuna steaks at Sam’s Club, so I decided to adapt the recipe to them. For this recipe, make sure to get Ahi tuna or sushi grade tuna for the best results. Ahi tuna is also known as yellowfin tuna.

This tuna is so easy to make at home, its ridiculous. I used a marinade of soy sauce and honey to marinate the steaks for an hour before cooking. In Alton’s recipe, he also calls for wasabi powder, but I left out the spicy powder because of our little guy. Make sure to only barely sear the tuna, about a minute on each side, and probably 30 seconds on each edge. This will produce a lightly seared tuna steak that is very rare, and raw inside. You can continue to cook your tuna to the desired temperature, but the more you cook tuna, the more dried out it will become. 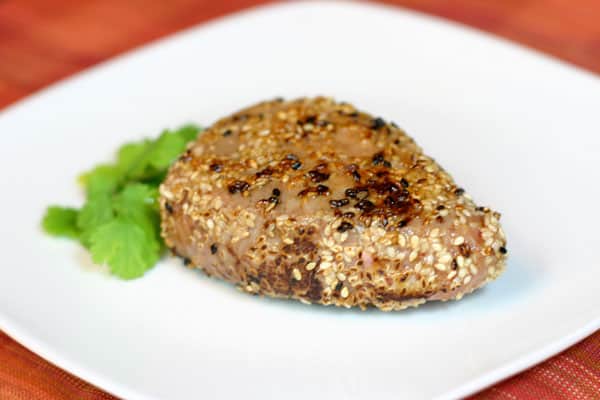 Stir soy sauce and honey together. Pour over tuna steaks and coat them well. Let them marinate for at least 1 hour.

Preheat a large skillet. Drizzle with sesame oil. Sear tuna for just about a minute on each side and on the sides. This will produce a very rare steak. You can cook a little longer, but remember that tuna easily dries out the more you cook it.

Be sure to share on Instagram with the hashtag #EclecticRecipes and tag me, @EclecticRecipes!
Posted by Angela McGowan   on   March 18, 2010