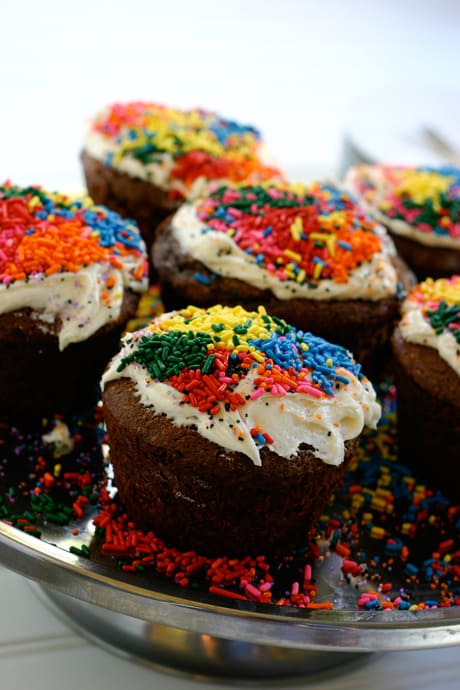 My toddler won’t be a toddler anymore soon. This Saturday he turns three. We are celebrating his birthday early, since Daddy has to be out of town this weekend with school. We made these day before yesterday. For all of his birthdays, I have made his cakes. Starting first with this Cookie Monster Cake, and then last year with this Elmo Red Velvet Cake. However, he has now spotted the fancy cakes in the supermarket, and well, I just can’t compete with airbrushed cakes, and toys sitting on top. So I took him to pick out his own store bought cake this year, a Lightening McQueen and Mater (from the movie Cars) cake. We are going to start off Friday by going to Monkey Joe’s, which is basically a large air conditioned warehouse full of bounce houses, and then off to the water-park.

I gave in and made these for him the other day because he is always asking to make cupcakes with me, and I turn him down so much. But knowing that I wouldn’t be able to make a birthday cake for him, I wanted to make these early enough that they would be gone by the time his birthday came around. They were an impromptu recipe, so I adapted the recipe for a 1-2-3-4 cake off the bake of the Swan’s Down Cake flour box. I also halved the recipe so it only made a half dozen large cupcakes. Julien broke the eggs, helped measure, and poured every ingredient in the stand mixer. They came out surprisingly good. He also helped me with measuring the ingredients for the frosting, and then I mixed it. I spooned the frosting on each cupcake and helped him spread the icing around. The sprinkles were all him. He went sprinkle crazy. We both had a blast making and eating them. He couldn’t wait to show Daddy his cupcakes when he got home. He was so proud of them.

For the cupcakes:
Preheat oven to 350 degrees. Add butter and sugar to stand mixer. Mix on high until it is creamed. Turn mixer to medium. Add eggs, one at a time. Sift salt, flour, cocoa powder and baking powder together. Add flour and milk alternating, until it is incorporated. Add vanilla and mix on medium just until incorporated.
Pour batter into jumbo muffin pan.
Makes 6 jumbo muffins.

For the icing:
Combine butter and sugar in a large bowl. Use hand mixer to combine on low.
Add milk a little at a time until frosting is desired consistency.

Be sure to share on Instagram with the hashtag #EclecticRecipes and tag me, @EclecticRecipes!
Posted by Angela McGowan   on   October 20, 2010