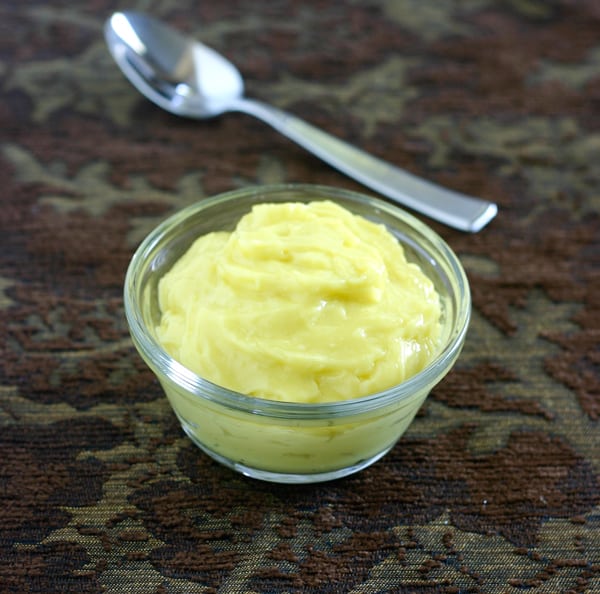 Alice Water’s is an intriguing woman I knew little about until a few days ago. I gave her aioli recipe a try after wring a blog post at the Family Kitchen about Kim Severson’s relationship with her, and how Alice changed her life for the better. I had never made aioli before, it takes a little time and patience, but is so worth it. I made it with only olive oil and lots of crushed garlic that I pulverized with a mortar and pestle.

This recipe was also featured on Babble’s Family Kitchen.

1. Pound the garlic and the salt in a mortar and pestle until it’s smooth.

2. Separate the egg and add the yolk to a mixing bowl. Find something else to do with the egg white.

3. Add about half the garlic and the water and mix well with a whisk.

4. Using a cup with a spout, dribble the olive oil into the egg yolk mixture, whisking constantly. It helps to wrap a damp kitchen towel around the base of the bowl to keep it from moving. Or have a friend pour while you whisk.

5. As the sauce thickens and lightens in color, add the oil a little faster but keep whisking.

6. Taste and add more of the salt and garlic mixture. If it’s too thick, thin it with water.

Notes: In the spirit of the post, I did everything exactly as stated, using a hand whisk, and it turned out great. But I thought it was a little lumpy (actually looking back, it was perfect, just thick), so I let it sit a few moments and then went crazy with the hand whisk again and it separated. To fix it, I got out the hand mixer added an additional egg yolk to a new bowl and treated the failed aioli as olive oil to add to my new yolk. It turned out great, it just needed a little more salt to for the extra egg.